more
In Addition To The GDP Data, How To Assess China's Economic Situation?

China's second quarter gross domestic product (GDP) growth figures confirm the economic outlook to be lower than expected. To learn more about the actual economic situation in China, this paper will examine a series of economic data.

Concerns surrounding China’s economic slowdown have been persistent in the markets for a long time. But when China surprised markets by aggressively cutting its interest rates twice in just one month, it was clear that economic prospects may have been worse than expected. The nation’s second quarter gross domestic product (GDP) published shortly after did indeed confirm this, except some now wonder whether things could be even worse than the headline figure suggests. In this article, we will take an in-depth look at a range of other economic indicators in order to further understand China’s true underlying economic situation.

When the People’s Bank of China (PBoC) cut interest rates early in July, markets took the hint that the economic conditions in China were worse than previously expected. The central bank had cut its benchmark interest rates two times in just one month, slashing the one-year lending rate by a total of 56 bps, in addition to increasing the discounts that banks can offer on their lending rates from 10% to 30% (in total from the two rate cuts).

This makes the effective lowest lending rate, taking into account the deepest discounts, 170 bps lower over the two rate cuts, illustrating the aggressive moves from the central bank to either preempt or offset the negative impacts stemming from weak overall demand.

Sure enough, one week after the second rate cut, the 2Q 2012 GDP figures did indeed show a significant slowdown. Second quarter GDP grew just 7.6% year-on-year. This was a marked slowdown from the 8.1% year-on-year growth seen in the first quarter this year and was also the slowest pace of growth in 3 years.

While a 7.6% GDP growth indicates a meaningful slowdown in the Chinese economy, some have doubted whether this reflects the country’s true underlying economic situation; some worry that the slowdown may even be more severe. One of the concerns that have sparked worries in the market recently is the possibility that China’s GDP figures have been manipulated, or "smoothed out". In fact, Vice Premier Li Keqiang, also once explicitly agreed that the official GDP figures had its shortcomings. He claimed that electricity, rail cargo volume and bank lending figures were more accurate figures, less prone to manipulation or error, and can serve as proxies for the Chinese economy.

Looking at China’s electricity production growth trend in Chart 1, we can see that its quarterly growth rate has decelerated at a much faster rate than China’s overall GDP. Additionally, the figure decelerated to a zero percent year-on-year growth in June 2012. The trend is worrying as we have generally seen electricity production growth move approximately in tandem with GDP growth; this trend was most obvious during the period from 2002 to 2007. The figure has also proved to be slightly more volatile than GDP growth in this period. From 2008 onwards however, we can see that electricity production has become much more volatile than GDP growth, likely a result from government intervention (stimulus), and reflecting the fact that economic conditions may actually be worse than what the headline figures suggest.

A similar trend can be seen if we consider the rail cargo volume growth trend in Chart 2. Nonetheless the latter figure has proved to be much more volatile in the past and so the recent slowdown in rail cargo volumes could just be a feature of its volatility and does not indicate further weakness in particular. 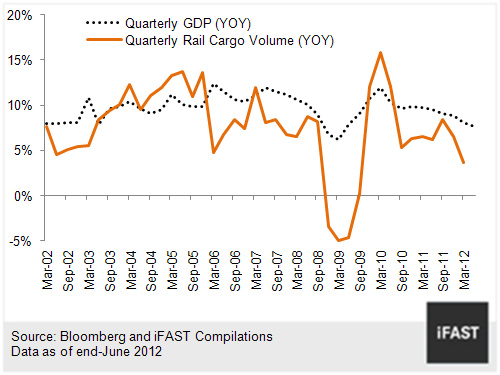 On the other hand, after decelerating for two years, bank loans growth has started to pick up since end-2011. However, we think it’s hard to say that the two figures have had a tight relationship before, especially if we consider the two figures’ trends in the past ten years in Chart 3. In fact, a relationship can only be properly deciphered after 2008. Thus we wouldn’t be too optimistic judging solely from bank loans growth figures. From the three figures which Li Keqiang recommends as more reliable, we can see that it is highly possible that the economic conditions in China are worse than the 7.6% growth suggested by official figures, especially as we look at the rate at which electricity production growth has declined. Nonetheless, the recent deceleration in electricity production and rail cargo volume growth has been witnessed before, and this sign does not always translate into significantly slower GDP growth rates, but does raise red flags which warrant concerns.

Looking at a separate range of figures, the Purchasing Managers’ Index (PMI) surveys, which are commonly viewed as leading indicators, weaker economic growth can also be expected.

PMI figures are typically viewed as leading indicators for the economy. If we look at the overall index as well as its components, we can see clear signs that the Chinese economy has weakened in recent months and that a strong rebound is not on the way any time soon. In June, the overall manufacturing PMI figure, as compiled by the China Federation of Logistics and Purchasing, fell to the lowest level in seven months of 50.2, where a figure above 50 indicates an expansion. Despite sustained expansion, in the following sections, we will see that the individual components suggest a more worrying picture.

Although there has been a lot of talk about a transformation towards a consumption-driven economy, we recognise that the transformation is not going to happen overnight. Consumption still needs a lot of time before it can take over the large role that exports and investments have had on the economy in recent years. Thus, exports will remain to be an important driver to China’s economy.

Unfortunately, as external demand continues to weaken, we can see from Chart 4 that this will weigh on China’s exports. New export orders saw a steep decline in June to 46.5, indicating a contraction. The PMI figure has hovered below its historical average for over a year now. As export orders decline, use of raw materials automatically declines, hence explaining the overall declining trend of inventory of raw materials since early 2011 in Chart 5.

But China’s economic weakness does not only stem from weak external demand. Chinese companies’ overall inventory levels and stock of finished goods have been rising, indicating a weakness in overall demand (domestic and external). The figure in Chart 6 indicates New Orders PMI minus Inventory PMI, giving us an indication of upcoming additional output. Although we saw this figure rebound in March, it has subsequently recorded a steep decline. Plus, it had been trending downwards for the whole of 2011. Another clear sign of weak demand can be seen in the Stock of Finished Goods PMI in Chart 7; this figure indicates the amount of finished goods producers still have on their hands. Although the figure exhibits volatility, there has been a clear overall upwards trend since end-2009. More significantly, the figure has surpassed 52 points for two consecutive months in May and June, indicating that unsold stock is growing, highlighting the lack of demand. 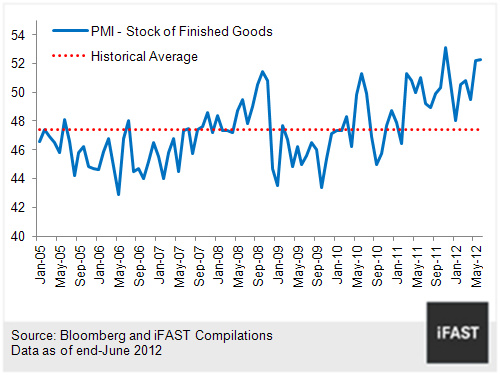 So what is the true underlying economic situation like in China? While there is no accurate answer to this question, the figures we have examined in this article has given us a guide. Most figures have indicated a significant slowdown in recent months and point towards continued weakness in the Chinese economy’s future. In particular, electricity figures indicate that the economy may be worse than what the 7.6% growth figure suggests. On the other hand, new orders less inventories PMI indicate that upcoming demand may remain weak and that there is no sign of a strong rebound in the economy around the corner.

In our view, considering that China has experienced a prolonged period of high economic growth, in the long term, growth will taper off to a slower pace, as the country adopts a more sustainable economic model. Particularly in the past three years, China has relied too much on government policies to artificially boost its growth rates. Not only is government support unsustainable, but it has also subsequently introduced other risks into the picture. Going forward, China not only needs to transform its economy into a consumption driven one, it also needs to implement financial system reforms to remove the bottleneck in the economy caused by its banking and state-owned enterprises monopolies and shadow banking system (a topic we will cover in subsequent articles). These are areas of reform in which Premier Wen has also acknowledged as necessary, in addition to liberalising the RMB currency and interest rates, an initiative the central bank has already taken steps to implement.

Slower growth in the long term should not be "news" for the markets, and we believe that part of this has been priced into the depressed valuations we have seen for a prolonged period. Despite slower growth and weaker economic prospects, this has not materially changed our view towards the Chinese equity markets, since valuations remain extremely low to the point where risks must at least be largely priced in.