more
China: What are the implications of a 7.5% Growth Target?

At China's first National People's Congress (NPC) meeting this year, held on 5 March 2012, Premier Wen Jiabao announced that the nation's gross domestic product (GDP) growth target will be adjusted downwards from 8% to 7.5% for 2012. In this article, we will discuss the implications of the 7.5% revision of GDP growth rate target and our expectations for the economy in the coming years.

 China: What are the implications of a 7.5% Growth Target?

At China’s first National People’s Congress (NPC) meeting this year, held on 5 March 2012, Premier Wen Jiabao announced that the nation’s gross domestic product (GDP) growth target will be adjusted downwards from 8% to 7.5% for 2012. The announcement shook markets, temporarily halting the Chinese equity markets’ year-to-date market rally, leading it to decline for three consecutive days. Even though this was the first downwards adjustment after holding it at 8% for 7 years, given the actual implications of the 7.5% GDP growth rate target, we think the market’s initial reaction was overplayed. In this article, we will discuss the implications of the 7.5% revision of GDP growth rate target and our expectations for the economy in the coming years.

First, we by no means think that the growth rate target revision reflects the government’s expectation of a dramatic slowdown to the 7.5% growth level. China has almost always been able to surpass its growth targets; in fact, looking at Chart 1, we can see that in the past 10 years, the economy has successfully grew at a rate which exceeded the official target every year, sometimes even by a substantial amount, such as that seen in 2007. But another way to look at this is that the government typically adopts a rather conservative growth target, so that it can be surpassed, minimising the occurrences of negative surprises.

If we consider the market’s expectations for the nation’s economic growth, we can see that estimates are above both the new and old growth targets. According to Bloomberg estimates, China is expected to grow at 8.5% and 8.4% in 2012 and 2013 respectively. However, the downwards adjustment in GDP growth rate does reflect expectations of a slowdown to some extent. But this should be nothing new to investors, given the evident signs of a sluggish global economy for at least half a year now. Since China would not be immune to a weak global economy, part of the underlying motivation to lower the growth target is to skillfully manage the markets’ expectations for the coming year.

Apart from managing expectations however, a slower growth rate also reflects a transformational year for China as the economy embarks on some major steps towards becoming a consumption-driven economy, as outlined under the 12th Five Year Plan (FYP). The government’s focus is now quality not quantity. A high level of investments is a typical feature of a high-growth emerging economy. But as China’s investments start climbing towards the 50%-of-GDP level, it’s hard to imagine the continuance of such large investments, in other words, it is unsustainable. Furthermore, such heavy reliance also means that even a minor shock to investments would have a substantial impact to the overall economy. This is why the government has put particular emphasis on pushing "quality" drivers of the economy, rather than pumping out "quantity" (i.e. large amounts of investments), in order to transform China’s economic growth model into a sustainable one.

Encouraging growth in domestic consumption to find quality drivers for the economy was one of the main focuses of the 12th FYP. China boasts a 1.3 billion population which means that there is huge potential for domestic consumption to surge if it can just tap deeper into the population pool. The basic idea under the 12th FYP is to increase the population’s propensity to consume. Some of the ways China hopes to achieve this is by expanding the services sector and value-added products to create jobs, raising minimum wages and to strengthen the social safety net so that the people will save less, spend more.

As mentioned in our previous articles, 2012 will be a fundamental year for China to implement these plans. One of the obstacles it has been facing is inflationary pressures, which will inevitably weigh on consumer’s propensity to consume. But as inflation seems to be under control, after declining meaningfully in recent months, we think the pro-consumption goals will be made just slightly easier to achieve. In particular, it will give the government more space to increase minimum wages, something that should only be done when inflation is controlled.

These goals are important for our analysis because Premier Wen, at the same time, emphasised that the government would be committed to finding quality growth. The transformation of the economy may put a slight drag on economic growth, especially at its early stages. But this is also partly why we view the downwards revision as a positive sign as it demonstrates that the government is willing to walk the talk, and sacrifice quantity for quality. This marks an effort to stabilise China’s economy in the long run, which is of utmost importance for the nation.

A secondary source of unsustainability in the Chinese economy is its reliance on exports. Referring to Table 2, we can see that during the periods of 1993 – 2001 and 2002 – 2007, exports growth had surpassed retail sales growth by a startling amount. Subsequently, net exports’ (exports minus imports) contribution to China’s economy started to climb, until it reached 8% in 2007. Heavy reliance on exports can make an economy extremely sensitive and volatile to changes in external demand. Looking at Chart 3, it is evident that the spectacular double-digit growth rates seen from 2005 to 2007 had been driven by rapid growth in net exports, which contributed over 2 percentage points in each of those years. But as soon as the financial crisis hit the global economy, net exports slumped and put a huge drag on the Chinese economy, pulling down the GDP growth rate by 3.6 percentage points in 2009, contributing negatively to economic growth. It’s also worth noting that in that same year, the economy was only able to grow at 9.2% because investments growth contributed a massive 8.4 percentage points to GDP growth, offsetting the exports’ drag. Now that the global economic outlook is not all that positive right now, weak exports as a result of weak external demand may lead China to record negative net exports this year. This means that we may witness trade contributing negatively to China’s GDP, another consideration that explains the lowered 7.5% GDP growth rate target. 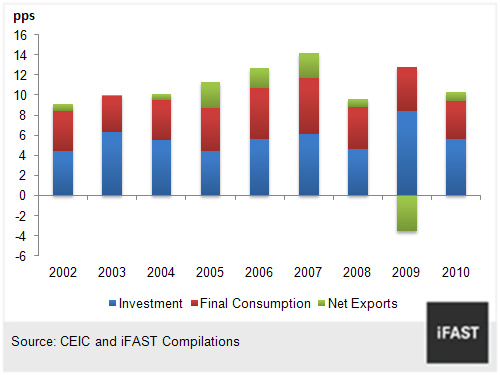 In February, China recorded its largest trade deficit in years, amounting to USD31.5 billion. For a country that has been known for its huge trade surpluses, this economic figure indicates the shifting dynamics between external and internal demand in China. In the first two months of the year (aggregated to reduce distortions from the Lunar New Year holiday), imports grew 8.2% while exports grew only 6.9% year-on-year; the figures highlight the relative weakness in external demand.

Moreover, it is not hard to see that this trend may persist this year. If we look at China’s main exports destinations in Chart 4, we can see that Europe is the largest contributor to Chinese exports, making up 19% of China’s total exports. In addition, we can also see that exports to Japan makes up 8% of total Chinese exports. Both of these economies’ outlooks for this year are relatively weak, leading us to believe that they will continue to weigh on Chinese exports. On the other hand, the pro-consumption policies mentioned earlier will continue to stimulate domestic demand, which will at the same time boost imports growth, further amplifying the divergence in growth rates of exports and imports. Therefore, continued weakness in external demand coupled with strengthening domestic demand means that net exports may not deliver any exciting (upside) results this year. Not only does this help explain the lowered GDP growth rate target of 7.5%, it also demonstrates that the shift from exports (and investments) to domestic consumption has become more urgent than ever before.

This sort of unhealthy competition is what induced local governments to borrow excessive amounts after the financial crisis to invest into suboptimal infrastructure projects. These were the investment projects which have subsequently enlarged the potential risks of a spike in non-performing loans in China.

We believe a lowering of the GDP growth rate target will also ease pressure on local governments, softening their need to compete for unsustainably high economic growth, coming from risky sources or projects.

In conclusion, we were not too surprised to see the moderate adjustment in GDP growth rate targets by the Chinese government and find that markets had initially overreacted. The GDP growth rate merely represents the weakening external demand, an effort to manage expectations of slower growth and the probable results from a transformation in economic growth model to find quality. In fact, the implications of the downwards adjustment along with the other topics addressed by the government during the National People’s Congress meetings, assures us that there will be continued progress towards boosting domestic consumption and stabilising the Chinese economy.

Thus, as we do not see this event to be detrimental to the market’s long-term outlook, we remain positive on the Chinese equity markets.